secretswig.com Read all about the Secret Swig adventures!

The Embrace Fan Directory A directory of Embrace fans - you're reading it.

Webthinking This is my web design company.

Near Life or Brothers & Sisters.

BUT, Save Me is the best live song ever.

The Astoria in 2000 was pure magic. They hadn't played anywhere for ages and then they hit us all with Drawn From Memory (the album). I remember hearing Save Me and thinking it was possibly the best live song ever. The atmosphere was brilliant, everything was brilliant.

Drawn From Memory. The memories, the organic sound, the songs and the b-sides... everything about that era was superb.

It has to be Brothers & Sisters, but I could probably pick from 10 or 15 of them. The Drawn From Memory b-sides were particularly wonderful.

The rest are a bit tedious, really. Not bad songs, as such, but very forgettable. It's a shame, because Sainted is super fab. It's all very safe, I suppose.

August 1999. I wanted to say how great Hooligan was. What an exciting chap. :o)

I don't post much these days because I can't be bothered. Quality, not quantity, is what it's all about!

Having become another hapless victim of the Embrace community, a pre-gig drink (a whole afternoon of drinking) was arranged. My first messageboarder confrontation was with designated Noob-Collector Clur outside the Hanover Grand on 27th March 2000. I had come along with my friends Dave and Evil Jon, and, thank God, because, upon entering The Shakespeare's Head, we were presented with a bunch of rowdy half-alcoholics, lead, of course, by Nick.

After introducing ourselves, the three of us huddled around a table in the middle of the pub and proceded to do not much for the rest of the afternoon. Socialising is over-rated.

Still, the gig was excellent. Every time I hear I Had A Time, I think of the Hanover Grand Fan Show. :o)

Yellow shirt with sunflower tied to the front. That shirt got signed by pretty much everyone and is now sitting in my wardrobe increasing in value as every day passes.

I guess many of the new 'uns on the board won't have a clue what I'm on about! Source the photos yourselves... the ones of Cherries dressed as an elephant are priceless. :o)

OK Computer, The Soft Bulletin and Abbey Road would make my top three. Then Neutral Milk Hotel's In The Aeroplane Over The Sea, followed by The Ideal Crash by dEUS, Spring by Cyann & Ben and The Holy Bible by the Manics.

Beyond that, who knows?

I sit in silence as I type, but, generally-speaking, I have been listening to:

Sweet Beliefs - Cyann and Ben, Let Me Introduce My Friends - I'm From Barcelona, Takk - Sigur Ros, Innervisions - Stevie Wonder, Ships - Danielson, Espers II - Espers, Through The Windowpane - Guillemots and At War With The Mystics - The Flaming Lips, together with other various bits and bobs.

Orange, but black is a nice alternative.

"I'd love to come shopping", or
"Sven did a great job for England"

Very good, especially on those long summer evenings. Very especially when we win The Ashes. :D Now, if only we can retain them in Australia this winter.

I had some toast with butter a little while ago. Think I'll have some cereal in a minute. It will be Jordan's Almond and Raisin crunchy muesli thing.

When I was a little bit older, I fancied being a pilot (didn't everyone?). In the end, I decided to make websites. How did that happen?!

I can't imagine any of them helping! Rock stars are far too cool for kitchen stuff, or so they would have us believe. Sell a few records and suddenly you're too big to chop vegetables or wash up or set the table.

I reckon Mickey might peel a few spuds or something.

Cats, although our two try to convince me otherwise with their RAMPANT BAD BEHAVIOUR. They are lovely though. Meow.

Peace and tranquility, far away from other humans.

Meh, depends what is meant by mad. Am I mad angry? Not at the moment. Am I mad loopy? Probably a little, but I wouldn't want to put a number on it.

I don't drink alcohol, I'm STILL Le Tournoi de ISS 2001 Champion and this is my website.

I can throw things faaaaar into the distance.

I am married to Pollyanna, whom I met on the way to Secret Gig #4. :D

If you've enjoyed getting to know Mark, you would probably find these people enjoyable as well: 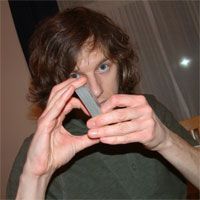 What people are saying about Mark:

"He aint heavy but my toes will never forget him. "

"He's fucked up all my anonymous zeroes. Bastard."

Thought-provoking wisdom provided by Kirsten:
What was your favourite Embrace gig?
Preston Mill, but SG15 in Liverpool was an amazing experience
Read more about Kirsten »

22,875 Danny Shaw 17,012 Mark 16,115 Sport Monkey 14,839 Katie 14,450 Healy more »
© Copyright Embrace Fan Directory 2006. Site designed and developed by Webthinking
The Official Embrace Website : Embrace Forum : Embrace @ Wikipedia : Embrace @ Happy and Lost
The FDPoints Chart Top of the Lush Top of the Hits Messageboarders only Picture profiles only Search by answers
Change my personal details Change my profile answers Change my profile picture Change my websites View my vote history Sharing my profile with others Delete my account
Log in to see favourites
You are not logged in: Login | Create Profile