V2004 Staffordshire. For overall guffawness. Just don't tell anyone I went to the 'V' festival.

None of them are great, except OON.

I have no idea what I said. It was 2004 sometime, when rumours of a new album [OON] were beginning to surface, and I was all excited and child-like and angst-ridden, what with being 15ish and all.

Hels. Who probably doesn't count, as we knew each other in a roundabout way before hand, and is actually responsible for using the board, and henceforth my failings in life. She's great.

Missing OON to go on a piss/bar manouvre.

Heckling at a Thirteen Senses support slot got me in a bit of trouble too, as did making [loud] comments about the state of Ben TCTC's new barnet. I got far too excited that I was standing next to members of the Broken Family Band once too.

Last Exit, Balls, Songs of Love and Hate, Goo, Black on Both Sides, McLusky do Dallas, Nation of Millions, oh fuck it there's too many.

Copious amounts of Absentee, who really are dreamy, but right now, some Sebastian Tellier.

I'm really quite a fan of jelly babies, although I never buy them. As a rule, purpley/black and orange sweets are usually my favourites.

Izzy is hot, and really like Paul Robinson, for representing everything I love about suave Australian over-sexed criminals, whilst Karl Kennedy is rah! and makes me fell warm and in love with life.

I say 'dude' far too often for a middle class white dude from suburban Bradford. With A-levels.

I use the Embrace message board. ALL THE TIME.

Good, although I've never been too good at arguing why.

A kit kat, any notion of Nestle killing babies goes out the window when Kit-Kat's are around.

Firtho, I have this weird fantasy in which we get into a fight over the amount of dressing we should put on the salad and I end up laying a bottle of balsamic vinegar into the back of his head repeatedly, whilst rubbing our home grown chillies into his eyes, as he cries for mercy.

I hate all domestic animals.

I don't really know, I'm still banking on going there when I cease to exist however. If my nihilistic tendencies permit it.

Where I'll go if I keep thinking about that hot nun from Neighbours.

I can't do with Madness, or UB40, or any other middling white man takes on ska/reggae.

I have a really large head.

And one wishes for a better picture to display, but one cannot afford a digitial camera as one spends all one's money on whores.

If you've enjoyed getting to know Lukey, you would probably find these people enjoyable as well: 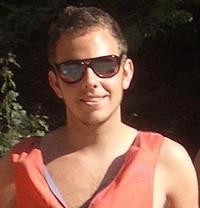 What people are saying about Lukey:

"Luke saluted me once. I swooned. He's dreamy."

"Somebody's been eating their crusts! Unless that's dirt on your chest."

"Needs to drink more meths to help put hair on his chest."

Thought-provoking wisdom provided by George Venables:
What are you currently listening to?
Arctic Monkeys - Whatever People Say I Am, Thats What Im Not
Richard Ashcroft - Keys to the World
The Rakes - Capture/Release
Art Brut - Bang Bang Rock n Roll
Test Icicles - For Screening Purpose
Read more about George Venables »

23,024 Danny Shaw 17,341 Mark 16,259 Sport Monkey 14,976 Katie 14,621 Healy more »
© Copyright Embrace Fan Directory 2006. Site designed and developed by Webthinking
The Official Embrace Website : Embrace Forum : Embrace @ Wikipedia : Embrace @ Happy and Lost
The FDPoints Chart Top of the Lush Top of the Hits Messageboarders only Picture profiles only Search by answers
Change my personal details Change my profile answers Change my profile picture Change my websites View my vote history Sharing my profile with others Delete my account
Log in to see favourites
You are not logged in: Login | Create Profile