Stylus I am "senior writer" here.

There is no outright "favourite". Even Smaller Stones, All You Good Good People, Blind, Feels Like Glue, Over, Out Of Nothing, New Adam New Eve and Brothers & Sisters are all favourites though.

The Astoria, January 2000. Tangible euphoria at a comeback. Fantastic. They're good at comebacks.

Shepherd's Bush Empire, September 3rd 2004 comes in a very close second though (another comeback), and the Hanover Grand gig (March 31st 2000) was a particularly intense experience, and SG#3 was very, very sweet.

This may and probably will change. Ideally I'd just sequence together my ten favourites and be done with it.

B-sides are the best thing about Embrace. Get On Board, Brothers & Sisters, Too Many Times, Blind, Flaming Red Hair, Feels Like Glue, Red Eye Shot, Dry Kids, Love Order and Come On & Smile are all big favourites.

I first posted in September 1998. There were about 8 of us back then. I introduced myself as the guy who used to do the fanzine. I've posted a few times since.

I left before the band played once. A week later I saw them again, and drank fifteen pints of Guinness before I got to the venue, so that Gav had to carry me there from the pub.

Last time someone asked, I said these;

I don't really like them. Can anyone source me some fizzy Vimto bottle sweets? Or just some actual straberry jelly. God I love strawberry jelly.

Billy Kennedy, because I can't remember anyone else's name. And he was a simpering prick anyway.

Pleasant. It's nice that in this day and age of high-speed living, work-related stress, hyper-tension, fastfood, superficiality and false meaning, twenty-two men can spend four days chucking a piece of leather at some willow. My dad played for Yorkshire schoolboys, you know.

Mickey Dale. Because I know he's into seafood.

A tool to scare people into orthodoxy.

Everybody else is completely batshit - I'm a beacon of sanity.

I have a reputation. I'm not sure what for. Embrace need to mix and master their records better. Batgirl is the love of my life. I have a thing about expensive German and American headphones.

If you've enjoyed getting to know Nick, you would probably find these people enjoyable as well: 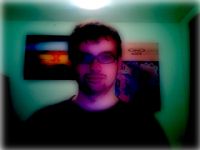 What people are saying about Nick:

"You've not been voted 8 before"

"Discombobulated rumbunctiousness in a teacup!"

Thought-provoking wisdom provided by vicky2:
What is the most stupid thing you've done at a gig?
i got covered in water one yr...........
Read more about vicky2 »

22,841 Danny Shaw 16,930 Mark 16,079 Sport Monkey 14,803 Katie 14,413 Healy more »
© Copyright Embrace Fan Directory 2006. Site designed and developed by Webthinking
The Official Embrace Website : Embrace Forum : Embrace @ Wikipedia : Embrace @ Happy and Lost
The FDPoints Chart Top of the Lush Top of the Hits Messageboarders only Picture profiles only Search by answers
Change my personal details Change my profile answers Change my profile picture Change my websites View my vote history Sharing my profile with others Delete my account
Log in to see favourites
You are not logged in: Login | Create Profile