Date of Birth: 27 September 1980 (Aged 40 years)
Location: London while at uni and harlow when at parents
Occupation: Student Nurse

Embrace Boarders A site about Embrace fans, which is starting to build up a supply of pictures and movies of embrace fan gatherings.

I really love drawn from memory because the instrumental part is great and the lyrics really mean something but IF YOU'VE NEVER BEEN IN LOVE WITH ANYTHING is definately getting to the top of my list....

Even thou it is not a song written by them I think the version of 3 is the magic number is great. But I also Like I've been running

I dont remember but it must have been something about me and what I thought of the music. It was probably near the end of 2000.

That would have been everyone I met at v2001 so if my memory serves me right that would be Graeme, Shaz, Ruff, Rach, Warren, And im sure there were some others but my memory has failed me there..

Well I suppose the stupidest thing I have done was not at a gig it was at pepsi's 23rd Birthday celebrations when we were waiting for someone she knew from the Music messageboard. It was someone with the nickname Lobster. So someone walked in and I went up to them and asked this 6ft person if it was him.. Luckily it was but it could have got nasty if I was wrong.......

Longview, The Killers, Damian rice, Razorlight, Zutons, Delays, Jet, The Music, Coral, Beth Orton and plenty of others that I cant think of at the moment

at moment probably longview, the killers zutons and ii the next few weeks ill be listening to the new embrace album

I got pissed last night!!!!

one day matches are much better than test matches

Well the last thing I ate was potato wedges and scampi

being at a concert with papa roach fans next to you chucking each other about... I TELL YOU THAT IS HELL I GUARANTEE IT.

Well interesting fact about me is i have just left a safe well paid financial job and have started uni to start training as a childrens nurse. so in three years time I will be a qualified childrens nurse...

If you've enjoyed getting to know Balco, you would probably find these people enjoyable as well: 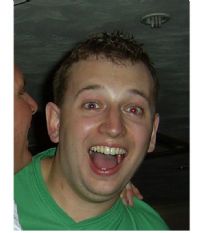 What people are saying about Balco: