It's got to be Sainted. It's pure sonicbonkerness that makes me want to dance on my desk and throw biscuits at passers by.

There are a few. There'll never be a SG as good as 4 and both the Brixton 2000 gigs were pretty splendiferous. I think it was them anyway. Maybe it was somewhere else.

Actually it may well be the Limelight in Belfast 2000. I'm too old to remember these things.

DFM, the music is fab but more importantly, it brings back sooo many good memories.

I've been running or the way I do. Mucho goodness!

The rest are all milling around there somewhere.

Many moons ago, around the time Hooligan was released. It probably mentioned cheese or was an insult to Wolla. Or Mr. Wolla to give him his full title.

Mary, at Hove train station. It was an auspicious event and should really be a national holiday.

Said hello to my future huband (only joking, dear!)

I refuse to incriminate myself by answering this question.

Mark telling me why he can't manipulate the database so I'm top of the FDpoints. Men, huh, they're useless.

The 100% chocolate 6 feet tall one that I would like to be manufactured instantly.

Tom Cunningham from Hollyoaks. He is ace.

I want my bed.

I went to a cricket match once, NZ v England, in Dunedin. The weather was lovely.

A parrot. What can a kettle do? does it have lovely colourful plumage? Is it adept at mimicry? I think not.

(I have no idea what this means but I'm sure it was absolutely hilarious at the time).

I think Mickey Dale would be very handy in the kitchen. Danny looks like he couldn't even boil an egg. Actually, I think Steve would do a good Sunday roast.

bed/chocolate! Chocolate in bed! But not a chocolate bed as I would eat it and I'd have to sleep on the floor.

Sargisons' snoring when you're trying to sleep!

I am really interesting.

If you've enjoyed getting to know Pollyanna, you would probably find these people enjoyable as well: 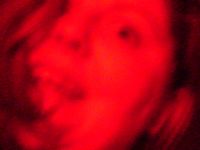 What people are saying about Pollyanna:

"I'll have a Pollyanna please Bob."

Thought-provoking wisdom provided by Frostie:
Who was the first messageboarder you met?
Met Suzi at SG#11. Sure I met a whole load of other people but not sure of their names.
Read more about Frostie »

22,841 Danny Shaw 16,930 Mark 16,079 Sport Monkey 14,803 Katie 14,413 Healy more »
© Copyright Embrace Fan Directory 2006. Site designed and developed by Webthinking
The Official Embrace Website : Embrace Forum : Embrace @ Wikipedia : Embrace @ Happy and Lost
The FDPoints Chart Top of the Lush Top of the Hits Messageboarders only Picture profiles only Search by answers
Change my personal details Change my profile answers Change my profile picture Change my websites View my vote history Sharing my profile with others Delete my account
Log in to see favourites
You are not logged in: Login | Create Profile