My MySpace Profile More about me :-)

Right now I love 'Out of Nothing'.

SG#10 or the Cavern Club, for the setting alone more than anything else.

At the moment DFM

It depends what mood I'm in. Blind maybe.

I've only heard it a couple of times so I'm not gonna say.

Summer 2001. I had been reading it for a while but was too scared to actually post anything. I thought I would sound stupid and felt like I was trespassing on the regulars' territory.

Funny thing is, those regulars who frequented the board back then have now mostly disappeared and I don't know whether to still feel like a 'new' fan or whether I have been promoted to an old 'un. Hmm.

I was desperate to go to the RAH gig and so I did - but I was throwing up all the way there!

All of the Embrace ones, all of the Oasis ones, "The Remote Part" by Idlewild, "Word Gets Around" and "Performance and Cocktails" by the 'Phonics, "Revolver" by the Beatles.

Whatever happens to come up on random on my iPod.

The red ones! I like the red flavour of all sweets best.

Harold Bishop. It's his love for God innit.

"I love Villa." (least likely? I will NEVER say that.) Or "I love Leicester".

Neither. Just boring - but my parents love it so I've actually been to hundreds of matches (mostly Leicestershire and Warwickshire).

Anything but a teacher... (because my parents are both headteachers) but guess what I NEARLY ended up being? Yep, a teacher.

Cats. I have two - Liquorice and Midnight.

The Ricoh. I actually want my ashes to be scattered there, okay guys?

Jimmy Hill used to live next door to me. He then sold his house to the Yorath family (Terry etc).

If you've enjoyed getting to know Katie, you would probably find these people enjoyable as well: 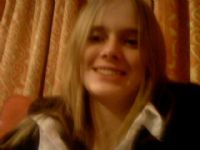 What people are saying about Katie:

"Katie reminds me of my dead mother."

"I don't need no good advice."

"Katie reminds me of a girl i knew, called Katie"

"She begged and pleaded for this vote. Very politely."

"Katie is alive and sexier than she lets on, now thats lush!! xx"

Thought-provoking wisdom provided by PeteG:
What are your favourite albums?
The Queen Is Dead by The Smiths, Saturnalia by The Wedding Present and Strip Mine by James.
Read more about PeteG »

22,955 Danny Shaw 17,191 Mark 16,186 Sport Monkey 14,915 Katie 14,536 Healy more »
© Copyright Embrace Fan Directory 2006. Site designed and developed by Webthinking
The Official Embrace Website : Embrace Forum : Embrace @ Wikipedia : Embrace @ Happy and Lost
The FDPoints Chart Top of the Lush Top of the Hits Messageboarders only Picture profiles only Search by answers
Change my personal details Change my profile answers Change my profile picture Change my websites View my vote history Sharing my profile with others Delete my account
Log in to see favourites
You are not logged in: Login | Create Profile