Date of Birth:
Location: T'up North
Occupation: I work in PR - it is soul destroying.

Happy and Lost Ramsay's site with contributions from some of us lesser mortals. Go there, for it is good.

Leeds November 04. Fine wines, Jagermeister, random friendly people, GATNOing and a dedication from Danny, what more could you ask for.

Special mention for Manc Apollo in O5 - for hopping dances to Rolling Stones and Premier Travel lodge/inn/generic place flash drink mobbing through back door type scenario and PeteV and his 10,000 beers.

SBE in April 05. Undoubtably special for lots of reasons not least of all Danny's acoustic Fireworks. Phwoaaaarrrrrrr.

GWO but it is very closely followed by DFM.

Out of Nothing. and repeat.

Even Smaller Stones is as good as it was when I first heard it live back in 2004.

About 6 years ago about advice on lightweight moshing etiquette....Shaz said "wear trainers - not white ones"

The Shazpot. Closely followed by Ruff, Ramsay, G, Pepsi, Kate and then the Firmeister, Brooky, Pete *the lick* V and loads more since.

I wore THE hat all the way through Brixton more or less.
I couldn't really see anything.

Random Ipod mooosic. All I Need - Radiohead proving to be a much played track

No no no, Tooty Fruity's and the purple ones at that.

Since the departure of Dylan and less recently Darren Neighbours is officially rubbish, although that Riley dude has great hair but is unfortunately a very annoying member of one of the most annoying Neighbours families ever.

I prefer Bert over Ernie

Any sport which sees one of it's heroes drunkenly dangling his babies feet over the open top of a London Double Decker is undoubtably evil.

A criminal psychologist and before that I wanted to go to Antartica and do stuff with stuff. But I was utterly abominable at science. Nuff said.

I wouldn't want Danny, his hair would undoubtably find it's way into the food at some stage in the whole madcap process and that would be wrong - HAIR INFILTRATED FOOD IS WRONG.

We have Sneeze, the long suffering cat.

Hum...I like hats. I have lots. I once went a bit of the way up Everest. It's universal knowledge that I am doomed whenever I try to travel anywhere.

If you've enjoyed getting to know Izz, you would probably find these people enjoyable as well: 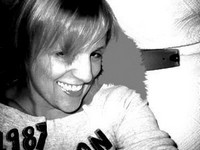 Thought-provoking wisdom provided by Jenny<3Danny:
Hell is
in the ground?
Read more about Jenny<3Danny »